Today I should have been making my way back from the UNESCO world heritage site of Konso, in the south west of Ethiopia, to the captial Addis Ababa. But the on-going protests there (and strong government response) flared up again a couple of weeks ago. These events bypassed the international media. So my plans were duly changed and I would stay in Addis Ababa.

Lucy at the National Museum in Addis Ababa

Arriving in Addis Ababa last weekend, and having seen Lucy(!) I was determined to see some of the beautiful mountainous countryside that rings the city this weekend. I started planning a weekend trip out to the lake region around Bishoftu in Oromia. On Sunday, protests at the Ireecha celebrations, the resulting tragic deaths of over 50 people from the government response to the protests, not to mention the general anger felt against the government, meant that this was also a place to be visited another time.

The next idea was to change hotels and move out to the leafy outskirts of the city for the weekend. But with the protests also moving to the outskirts of the city on Tuesday, with foreign businesses being attacked and the sad death of a Californian-based researcher, this was also not a sensible option. So I am now travelling back to Nairobi instead.

The anti-government feeling is certainly strong. A taxi driver told me the other day that around 80-90% of city dwellers also had grievances against the government – it’s not just those in Oromia. But in the next breath he was acknowledging the good that the government has brought to the city. It is certainly not a simple issue.

This story makes it sound like Ethiopia is rife with protests and unrest. And whilst I don’t think this week’s protests and strong government response will be the last; to a certain extent the government’s message that everyday life continues as normal within the city is true. Restaurants and cafés are packed with people eating injera and pizza, and drinking macchiatos. Students roam the campuses. People go to work.

But those restaurants and cafés don’t have wifi. In fact all mobile data has been turned off. International calls and texts are not possible at the moment. And as I write this all internet appears to have been switched off again. There are fewer students coming onto the campuses from the regions outside the city. And some of those people at work are having meetings about the security situation.

The UN issued a statement yesterday calling for an independent investigation. The problems here are real and desperately need international pressure to help to resolve them. But on a smaller scale, in the centre of Addis Ababa, everyone I’ve encountered, from the people I’ve met at meetings, to taxi drivers, to the ticket officers at the railway, to people who live close to the hotel, to people on the street – all have been welcoming and friendly. I took a different route back to my hotel the other afternoon, just because I wanted a change, and a man on the corner of the street stopped me, concerned that I was lost, and told me that my hotel was the next road up.

Considering everything – I’ve felt welcomed and safe here, and I sincerely hope to return in the future, but more than that, I hope the government starts to listens to its people… 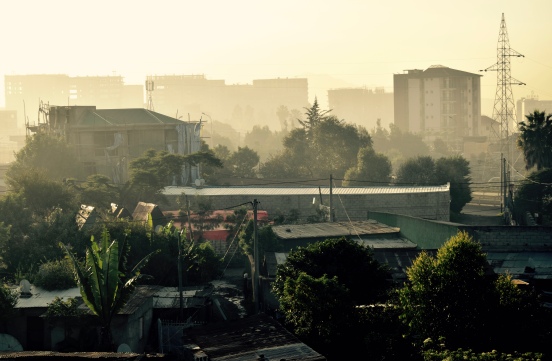 View from my room in Addis Ababa this morning

(Due to the internet being off again this moring I won’t be able to post this until I get to Nairobi.)